QBO Still Not for Government Contracts

Technology is moving at warp speed and this holds true for accounting software as well. For the last 20+ years, QuickBooks Desktop has been the go-to accounting software for small businesses, including government contractors. In 2004, Intuit unveiled QuickBooks Online (QBO) to keep pace with the demand for real-time, anywhere software. Since then, QBO has grown in its available features. Unfortunately, for government contractors, it is still lacking.

A key requirement of any accounting software for government contractors is the ability to track contract costs. More importantly, the contract costs have to be tracked down to the contract line item (CLIN), deliverable, or task order.Our blog Federal Contractors DCAA Compliance Checklist, talks about this. After several software rewrites, QBO now offers job cost features. Hector Garcia, CPA has a great video on this new feature. However, QBO only has the capability to apply labor costs to jobs if you are running payroll within QuickBooks. As government contractors understand, when the federal fiscal year ends, money is not always available for the next contract year.  Therefore, you need the ability to make changes to the contracts or task orders assigned when government funding becomes available.

Another problem for federal contractors using QBO is when using the in-program payroll processing. In QBO, payroll taxes are also posted to the jobs. This is a problem for most contractors, because payroll taxes are typically included in a fringe rate pool to be allocated across total company labor.  Even for a company that charges payroll taxes directly to a project, the problem is allocability for government contract purposes. Per FAR 31.204-4, a cost is allocable to a Government contract if it is (a) incurred specifically for the contract, (b) benefits both the contract and other work and can be distributed to them in a reasonable portion to the benefits received, or (c) is necessary to the overall operation of the business although a direct relationship cannot be shown.

FUTA and SUTA taxes max out within the first few months of the year. The social security portion of FICA tax could max out for highly paid employees, like IT professionals and engineers, within the first 9 months of the year. Using QBO to apply payroll taxes as a job cost allocates more FICA, FUTA, and SUTA tax to those contracts or task orders worked on at the beginning of the calendar year and less to those worked on at the end of the year. For this reason, fringe expense (payroll taxes, benefits, leave) is traditionally allocated proportionately over the entire year. Otherwise, by charging jobs directly for payroll taxes, they become a direct cost of the contract which violates FAR 31.204-4(a).

Payroll taxes fall under FAR 31.204-4(b) and per FAR 31.203(g)(2) which states the base period for allocation of the cost is the contractor’s fiscal year (for small businesses). So again, you would violate the FAR by not spreading payroll taxes across a fiscal year.

If you are processing payroll within QBO, and the timesheet requires correction, you will be unable to make the changes to a processed paycheck (after the pay date) unless you contact Intuit.  As a government contractor, you need the flexibility to make corrections to jobs and service items when changes occur to funding documents, amendments, change orders, de-obligations, re-obligations, and just plain old timesheet errors, on the fly.  Your ability to bill and get paid depends on it. In my experience, errors are normally caught after payroll is paid, not before.  Any disconnects between timesheet data and payroll will become an audit problem for federal contracts since company books and records must properly reflect all costs incurred.

QBO does have a partial work-around for those companies that do not want to process payroll within the system and prefer to use a third-party payroll company. QBO will allow you to enter timesheets that reflect the cost and billing rate of the time entered. The labor cost then shows on job cost reports. However, unless you process these timesheets through QBO payroll, they are non-posting. So, while the labor cost shows on a job cost report, the labor cost does not post to the General Ledger nor show up in any financial reports.

In our blog, Top 5 failures in a Preaward Survey, we identified at least two areas on the SF1408 related to labor that show up as deficiencies in a DCAA audit. Your only option is to enter journal entries to allocate the labor from the third-party payroll company. However, then you will need to develop a way to demonstrate how the labor distribution ties to payroll reports and timesheets.

Lastly, the desktop version of QuickBooks Pro or Premier costs $300 and $500, respectively.  Intuit provides support for 3 years after releasing a version.  The desktop version is going to cost you $100 or $167/year. However, each additional simultaneous user will require an additional license.  QBO Plus or Advanced will cost $105 and $185 per month including the self-service payroll. Annually, the costs are $1,260 to $2,220, respectively. QBO will allow up to 5 and 25 simultaneous users, respectively.

QBO has come a long way with its job cost features. It’s a great option for construction contractors and purely commercial entities. However, for federal contractors that deal with FAR, DCAA, DCMA, funding problems, cost reimbursable billing, de-obligations, change orders, etc., it still has some growing to do. When QBO can allow manual payroll processing, then federal contractors have a viable option for accounting system compliance. If you need to have a DCAA compliant accounting system, before or after Intuit’s next update to QBO, just let us know. 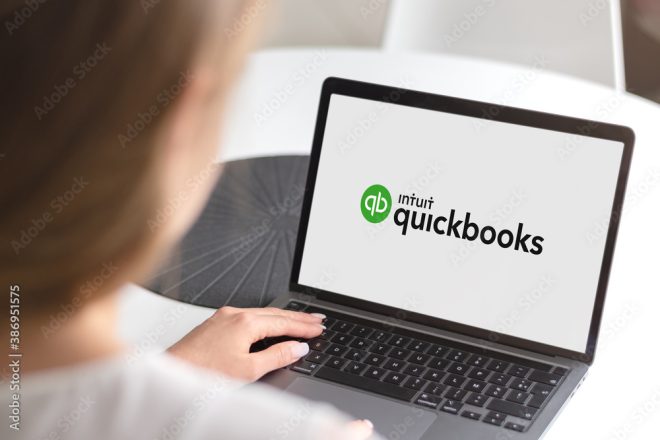